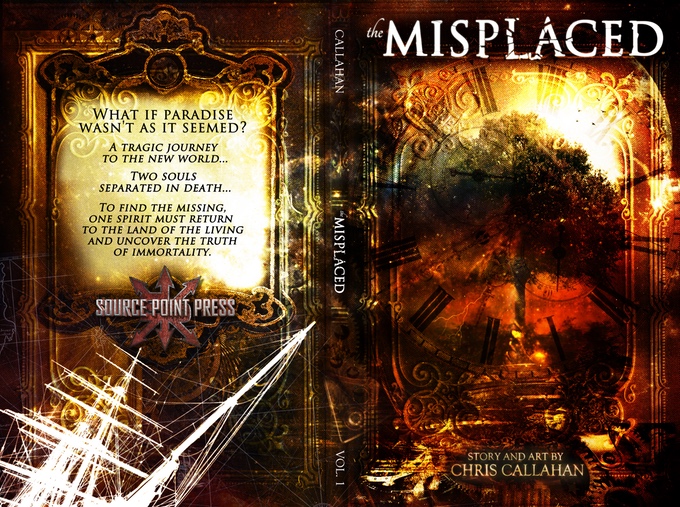 As I mentioned on the Facebook page, I generally ignore DMs on Twitter as they’re usually spam bots or folks fishing for mentions etc.  Early hours of yesterday morning, I had a message from Chris Callahan (@rgb_alpha) asking if I would like to review ‘The Misplaced’ and back the project on Kickstarter.  Before replying, I checked out the project and the artwork hit me with a Neil Gaiman-shaped sledgehammer.  I immediately saw ‘Sandman‘ and was blown away by the artistic style.  So I said yes and he dropped me a digital copy of issue one to have a gander.

I have to admit, I initially thought Chris was a newbie to the comic creator realm and was looking to make a name for himself.  So I checked him out and he has quite the impressive background.  Having strong roots in logo creation and years of experience within the comic book and television industries he has dived into the indie comics scene on his own with ‘RoboChuck‘ and now ‘The Misplaced‘.  As a strong supporter of indie creators, he has created works of art.

If you wish to support Chris and the project click here.  Check out his production company, TurtleBunny Productions.

So, open on my screen is “The Misplaced” #1 along with WordPress.  Perhaps it’s serendipitous that my first proper [attempt at a] review is also based on my first encounter with Chris’ work.  Aside from the striking artwork the text and dialogue has an air of poetry to it.  There are layers of intelligence behind the dialogue–by that I don’t mean fancy words but a structure which conveys the intelligence of the characters as well as a voice for the narrative.  As I read James’ dialogue I do so with a voice in my head along the lines of the lead in a period drama (well, what I think he would sound like considering I’ve never watched nor read Pride & Prejudice and similar…unless you count the zombie rendition…).

As well as the Neil Gaiman-esque art I am reminded of ‘Hellblazer‘ as I swipe through the pages.  The writing is as poignant as it is wonderful to look at.  But what’s it about?  “In the aftermath of a horrific tragedy, a young man pushes through the afterlife searching for the soul of his lost bride.”  James, our protagonist (or perhaps in the eyes of the angels, the antagonist) finds himself in ‘Paradise’.  Both he and Anna, his wife, died at sea (or so we believe) only her soul didn’t follow him to ‘Nirvana’.  Questioning her whereabouts and the angels’ inability to give him an answer, James embarks on a journey and turns his back on ‘Eden’ in search of his missing wife.  I don’t want to spoil anything but as the story unfolds, we find a number of things that aren’t what they seem and will inevitably catapult James along his journey.

The artwork and text form a beautiful story that, by the end of issue one, I was craving for more.  As is always the case in the eyes of the reader, comics are never long enough but I find that issue one has a strong enough grip on me to draw me in to the Kickstarter campaign and grab myself the collected edition.  I don’t want to keep comparing this to other works because this is a strong title that doesn’t need to lurk in the shadows of another artist’s work.  In fact, the book has enough shadows of its own to contend with given the dark and gritty style and the shady goings as the story unfolds.

So if you’re an avid comic reader or fairly new to the scene and want to jump in, I can’t recommend this any higher.  If you want a dark tale of the macabre punctuated by panel after panel of beautiful artwork then I suggest you jump on this Kickstarter while it lasts – it ends on Friday 28th April and Chris has added a number of stretch goals to add even more value to your donation.

Check out the images below to see more of what I’m talking about.